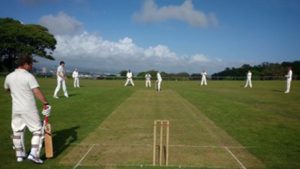 PB’s and club records smashed as we secure a victory against Cheesewring.

Andy PB and is the first player to score 150 plus in an innings (unless you have evidence of a greater feat).

Andy and Chris set a new 2nd wkt partnership of 173, beating the previous 166 also against Cheesewring.

Dave PB 4 for 6.
Ben 2 for 5 and a sore hand or two, he stopped  some cracking shots.
268 for 6th highest team score, three of the top six now against Cheesewring.

Three great catches from Dave (2) and Angus to dismiss batsmen 2 and 3  for golden ducks and take the final wicket.

We won the toss and on a pitch resembling something from the sub continent batted first.

After tea Angus struck quick to take the first three wickets to fall, including one in the first over, a high catch taken at slip by Dave and in his second over an instinctive c&b low to the ground off a fiercely struck drive. Josh, Kaylie, Rob Lock and Mike, found no luck with picking up wickets, Mike had the only wicket in their spells. Then the introduction of Dave and Ben saw the remaining 6 wickets fall 31 runs in 8 overs, Dave picking up 4 and Ben 2. The last wicket again falling to another great catch from Dave which saw them dismissed for 156.

Thanks to the Payn family for the teas and Dave Rosson, Vice President, for sponsoring the match ball.

Next game away to Stoke Fleming & Blackawton on Sunday 22 July, contact Andy with your availability, followed the next week with the tour 27 to 29 July, come along for a day or two or three, two games, a 20/20 on Friday and a full game on Sunday. Contact Rob Lock.