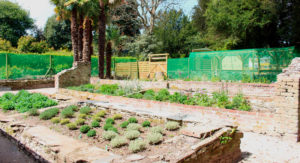 The fascinating and endangered Black Bee is the UK’s original native honey bee.  Dwindling populations are currently found only in remote areas of the country.  However, an almost pure and distinctive population has been identified by the B4 Project on the Rame Peninsula.  The discovery has generated a great deal of excitement.

The B4 Project aims to conserve our native honey bee and its aims are supported by the Duchy.  Other educational initiatives have been rolled out at various sites in the South West to raise public awareness of this hardy little bee.

A dedicated team of staff and volunteers here at Mount Edgcumbe has undergone a training programme which has enabled them to acquire all the skills necessary to maintain a healthy and productive apiary.

There are lots of exciting things underway here at Mount Edgcumbe and we wanted to share some more d...