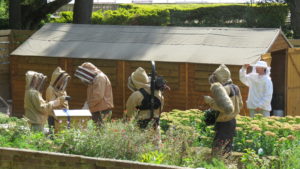 Previously thought to be all but extinct in the UK, an almost pure and distinctive population has been identified on the Rame Peninsula, and although they make up only one per cent of the bee population, it is thought they might hold the key to more sustainable beekeeping – Ellie finds out how.

Whilst on the Peninsular, they also caught up with Malcolm Baker, the last traditional fisherman in the Rame Peninsula.

If you didn’t manage to see the programme then catch up now and learn all about the Black Bee Project.

BBC One Countryfile at Mount Edgcumbe