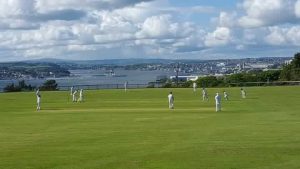 The opposition lived up to its name in a thrilling game at Barrow Park. Declaring at 235 for 5 we thought we had a good chance to win or at least draw the game, however Entertainers had other ideas and chased our total down to win in the final over with four balls to spare. Debuts for two players, Ben opened with Paul Edwards and put on a solid 67 for the first wicket, Paul out for 38. Chris 28 and Gareth Edwards and Gareth 68 and Tom 32* pushed the score along to 235, when Gareth was out following a partnership of 98 with Tom.

In reply at 87 for 3 and entering the last twenty overs we were still in command of the game, but that was about to change. If only we picked up one more wicket or hadn’t conceded 13 wides and 7 no balls, the outcome might have been so different.

Thanks to Margaret and Steve for the teas.

Next game away to Cheesewring Sunday 17 June, please contact Andrew with your availability.

If anyone would like to sponsor a match ball, please get in touch, a donation of just £10 (more if you wish) would do the job.